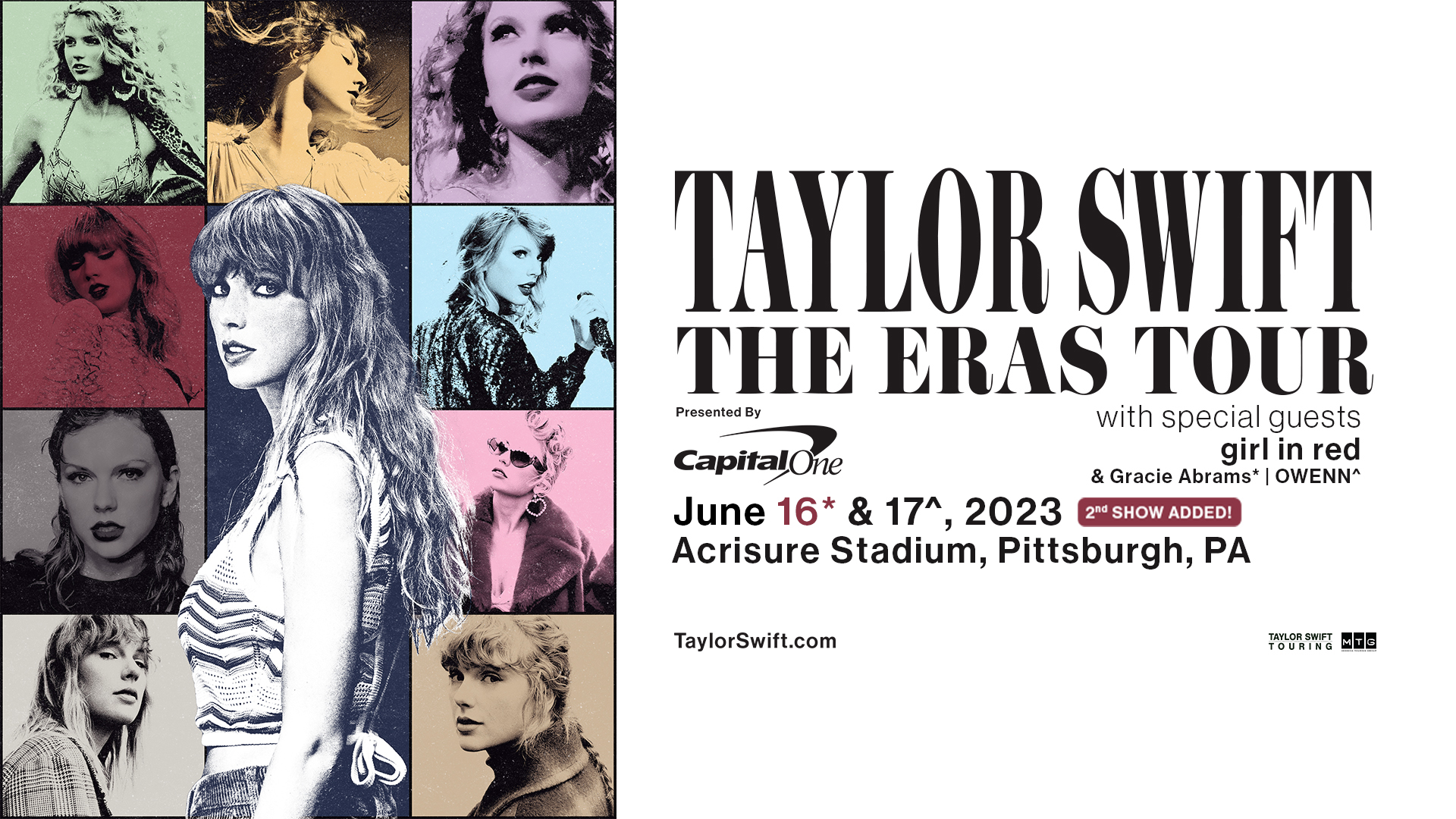 The U.S. leg of Taylor Swift | The Eras Tour was announced this morning just days after the eleven-time GRAMMY winner broke streaming, physical and vinyl album sales around the world. Taylor’s critically acclaimed album, Midnights, is the fastest selling album of her career. Taylor Swift | The Eras Tour will come to Acrisure Stadium on Friday, June 16 and Saturday, June 17, 2023 and will be supported by girl in red (June 16 and 17), Gracie Abrams (June 16) and OWENN (June 17). It will be presented by Capital One and produced by Taylor Swift Touring and promoted by the Messina Touring Group (MTG).

About girl in red

The alternative pop artist from Oslo, born Marie Ulven - is continuing her path to world domination, kicking off 2022 with a Best New Alternative Artist nomination for the iHeart Radio Music Awards.

It’s a well-deserved nod, considering she was the most played female artist on Alt Radio with “Serotonin”. The song reached #2 and spent 30 weeks on the Alt chart, 21 of those weeks in the Top 10. “Serotonin” streams currently surpass 84M for the track, with over 1.85 billion career streams to date.

girl in red spent much of 2022 on her first headline tour since the release of her debut album; she had a robust run across North America with major festival highlights including Coachella and Lollapalooza. She also had monster sets at Oya, Glastonbury and a sold out headline show at NYC’s famed Pier 17. A passionate live performer she will continue to tour, up next is a UK & EU headline run in 2023, including a sold out show at O2 Academy Brixton.

Ulven released her critically acclaimed debut album if i could make it go quiet in 2021, to world-wide critical acclaim from fans and critics alike. Celebrity supporters included Taylor Swift and Camilla Cabello and more. Press response was astoundingly positive, with many outlets proclaiming it  “Best of 2021” including but not limited to Rolling Stone, Billboard, Variety, NPR, Stereogum, NYLON and more.

In 2021, she also performed on The Tonight Show Starring Jimmy Fallon and Late Night With Seth Meyers, as well as TV performances worldwide including but not limited to Skavlan, Late Night Berlin and MTV’s EMAs.

This Summer, OWENN, the talented multi-hyphenate, brought his enigmatic spirit and smokey sense of soul to the forefront as he formally introduced himself on his debut tour, highlighted by a Main Stage East show at Lollapalooza Paris; OWENN carried the momentum from Europe having just recently opened for Lil Nas X on the two sold out New York, Radio City Music Hall shows – Long Live Montero Tour.

OWENN has attracted attention contributing dance moves on stages worldwide with A-list artists such as Beyoncé, Rihanna, Taylor Swift, Miley Cyrus, Lady Gaga, Alicia Keys, Megan Thee Stallion, Normani and others. Including, most recently working with Lil Nas X to choreograph his tv performances for MTV VMAs and live show appearances on the iHeart Jingle Ball Tour.  OWENN became a staple of Taylor Swift’s show on her 1989 Tour and Reputation Tour.  In 2019, he starred alongside Taylor in her video for “Lover,” as well as Normani in her video for “Motivation”.

Inspired by Prince, Marvin Gaye, Usher, Fleetwood Mac, David Bowie, and the Smiths, among others, OWENN’s emotional and spiritual approach to dance translated to writing and recording. OWENN’s debut EP will be released in fall of 2023.